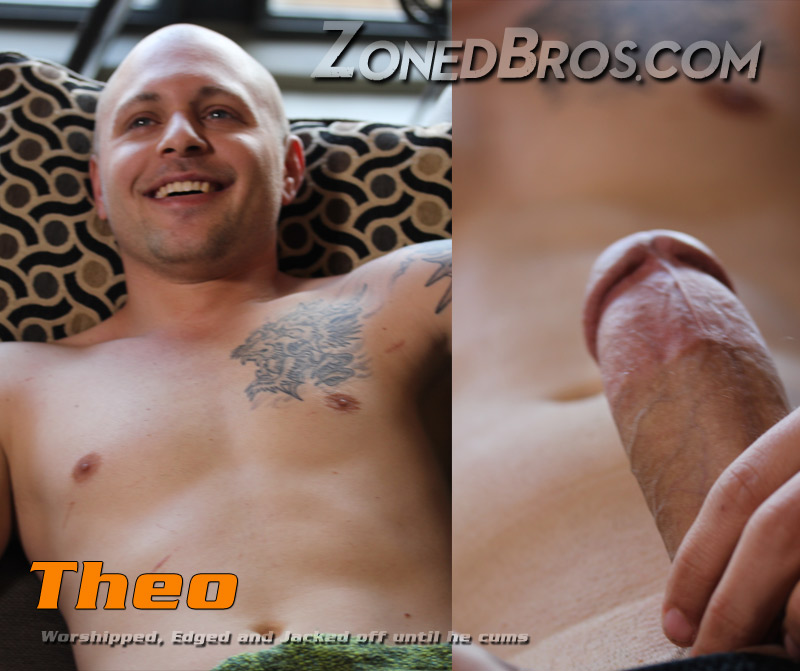 Shaved, tattooed and super studly, Theo is a double threat, an amateur wrestler and a surfer! This guy is as wicked hot on his surf board riding the waves as he is in the squared circle, dropkicking his opponents and making them submit! I checked him out a couple of times at the beach and tried to pick up a conversation, but I kinda got the cold shoulder from him. Hey, you just can’t click with everybody, you know? A couple of nights later, my buddies invited me to a local sports gym, where they were putting together a wrestling show, and to my surprise, Theo was there.

He kicked ass and despite my previous awkward encounters, I decided to go ahead and congratulate him. Theo was all smiles and said he recognized me from the beach! As it turns out, surfing gets Theo in the zone, it’s his way of relaxing, you might say, so he doesn’t really let anything else get in at that time, but now he was more than happy to talk about surfing, wrestling and life in general. I talked to him about my studio and said I’d be glad to get some footage of him and maybe shoot a pictorial or two, which would give him great material to market himself. He loved the idea and the very next night he was knocking on my studio door!

Theo was pretty enthusiastic about the shoot and it was way past 4 am by the time we decided to call it a night. I invited him to crash in since he’d had a long day and I wouldn’t want to worry about him having an accident while driving back the 20 mile trek to his place. He agreed and as he crashed on the couch.

Theo is a cool guy, but don’t forget he’s an amateur wrestler, last thing I needed was for him to get pissed the next morning after asking him if he’d let me jack him off on camera. Surprisingly, he said yes! After touching all the usual spots I have learned through the years are sensitive areas that can make a guy get raging hard, I was sure I’d have no problem. At the same time, my prodding had produced a huge hard-on that was noticeable though his shorts and even the blanket! It seemed to have a life of its own!